Bookmark and share the address of IntellivisionRevolution Forums on your social bookmarking website
Who is online?
In total there is 1 user online :: 0 Registered, 0 Hidden and 1 Guest :: 1 Bot

IntellivisionRevolution Forums » The Community Forums » Member Introductions » Just got my Intellivision back - found this forum.
Tweet

Just got my Intellivision back - found this forum.

Now, many many years later, she has passed it along to me.

So, of course, I've been trolling eBay to buy things for it, and checking out forums about it. So here I am.

Amazing thing is, while I don't have any of the original boxes (I do recall seeing them in my parents basement 10-15 years ago, but I know my dad had a "full cleaning" a few years ago, and got rid of them,) all the original manuals, overlays, and even the original receipt is still there!

When the system was still with my sister, I remained interested in the Intellivision, and bought the "Intellivision Lives!" and "Intellivision Rocks!" PC/Mac compilations when they each came out, and later Intellivision Lives for GameCube, and finally an Intellivision Flashback. (Which I just sent off to Byte Knight to upgrade to his "Ultimate" version - this will go to my sister in exchange for the real Intellivision, loaded with all the games we have physical copies of. Although I'm tempted to get another one upgraded for myself for ease-of-play.)

Back in the day, my sister and I would have frequent "Utopia" wars - always playing the same islands, to the point that we each have "maps" that are still with the manual for our "usual layouts." My sister usually beat me at Baseball, I usually beat her at Football. My mom was the best one in the house at Night Stalker.

When preparing to send off my Flashback for its upgrade, I made a spreadsheet, and between physical cartridges, the Flashback, and Intellivision Lives/Rocks, I own legal copies of all but 16 non-keyboard games.

After getting sniped on three of them on eBay in short order, (one a complete-in-box, with all ECS games other than Melody Blaster - also all complete-in-box,) I lucked out big time.

I had also been thinking of getting an Intellivision II to do an RGB mod to, to go with my other (not owned since new) vintage gaming systems connecting to my Sony BVM.  Found an auction for an Intellivision II boxed, with Intellivoice boxed, and "90 games" (about half boxed, half not, but with *MANY* duplicates even in that auction, much less duplicates with what I already own.)

Then I noticed in the fine print of the auction something not shown in the pictures: "I have an untested keyboard that I’ll throw in as well. I don’t have an ac adapter for it."  SCORE! The whole lot was buy-it-now cheaper than just keyboard components alone were selling for.  I sent a message to the seller asking for pictures.  (Heck, it might have been the fabled actual Keyboard Component.) It was an ECS base unit plus keyboard.  Immediately hit "buy."  Of course, the auction didn't list any ECS games, so I bought one of the two that actually interested me - Mind Strike (the reasonably priced one) on eBay as well.

So now, when the giant package arrives, I'll have an Inty 1, Inty II, 2 Intellivoices, 1 ECS (sans power brick, but I found a picture that shows its V/A requirements,) and 76 unique games among 146 cartridges.  The Inty II+IV+ECS+90 carts lot adds 15 games on cart I don't already own. (I've also bought a couple more I was missing from eBay since the first post.)  Almost none of the cartridge adds are ones I don't have a legal ROM of, though.  So when I first wrote the post, I said I had "all but 16 non-keyboard games." I'm now at all-but-13. Sadly, all the remaining are going for more than I'm willing to pay for an individual game at this point. (Although there is one Pole Position loose somewhat cheap, I'd prefer to get boxed now that I'm getting a large number of boxed games on the way.)

Edit: The giant eBay auction I just got does include 4 cartridges with their labels missing - I suppose there's a chance those could be some I'm missing - but I doubt it.

Posts : 5
Rep : 10
Rep : 3
Join date : 2018-02-17
Okay, after my eBay splurge purchases have all arrived now, I can give a full documentation of what I have. Of note, the eBay auction for the ECS had confusing pictures - it turned out a few of the boxed games didn't have cartridges in them, so they were in the "loose" pile. In addition, while an Intellivoice box was pictured with the Intellivoice on top (much like the Inty II was pictured,) it turns out there was an Intellivoice in the box plus a loose one!

In addition, there were 9 cartridges without labels. I managed to ID all but two. The last two won't boot for anything. One is a standard Mattel-style cartridge, the other is an Activision. (There was a loose "Lock 'n Chase" cartridge label floating in the box, and none of the other unlabeled carts are that, so I'm guessing the Mattel-style is that.)

Although, there were a few oddities in the shipment. Quite a few of the boxed games are Canadian English/French boxes. So a few of the manuals, even loose-with-no-box ones, are dual-language. But then there are two German manuals. One for a game that didn't even have a copy in the lot! Plus four of the loose manuals are also for games not in the lot. Lastly, a box for Shark! Shark! that isn't to be found anywhere. (While I assumed the failed unlabeled cart goes with the loose Lock 'n Chase label, it could be Shark! Shark!, too, I suppose.)

Then, trolling the "Facebook Marketplace," I saw an Intellivision lot dirt cheap, with a couple games I didn't already have. But ho - what's this? No.... That can't be... 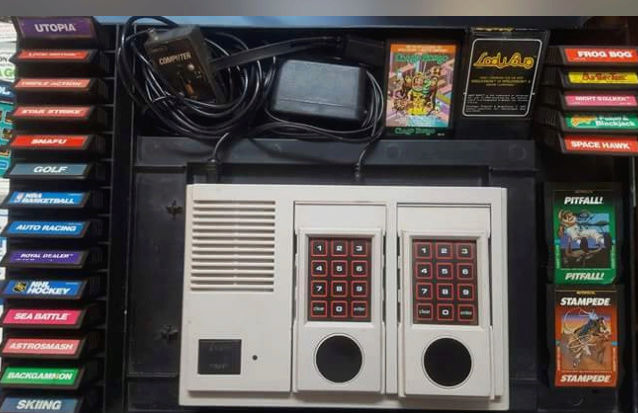 Yes, indeed, that's a Congo Bongo! Had to drive 50 miles to get it, but it was just a little ways past my in-laws' place, and I needed to drop some stuff off there, anyway. So it was only about 20 miles "out of my way."

Among the duplicates, a few titles are particularly "overly represented." 7 copies of Las Vegas Poker & Blackjack, 6 copies of Skiing, 5 copies each of Space Armada (including 3 different boxed copies all with different box variations) Star Strike, Burgertime (two of the unlabeled cartridges) and Donkey Kong (one still-sealed boxed Donkey Kong!)

Of the "original Mattel" releases, I'm only missing:
Tennis
Checkers (one of the loose manuals, though.)
Horse Racing
Las Vegas Roulette
Electric Company Word Fun (again, have a loose manual of it)
Pinball
(Not including most of the ECS titles, I only have Mind Strike and Scooby Doo.

(The other two loose manuals with no matching game are two copies of the manual for the INTV "Super Pro Football" release.)

Lastly, I had Thin Ice listed in my spreadsheet as owned - I could have *SWORN* I had that as a kid, but it is not in the cartridge stack, nor do I have the manual or overlays, so I must be remembering wrong. That leaves my "physical copies + ROMs from Intellivision Lives/Rocks/Flashback" count at 111 total games, missing 14. But since nearly all of those are ridiculously priced online, I don't think I'll be completing my collection any time soon. (But oh how do I want the ECS World Series Baseball.....)

Re: Just got my Intellivision back - found this forum.

IntellivisionRevolution Forums » The Community Forums » Member Introductions » Just got my Intellivision back - found this forum.

» So, how many intv fans are here?
» Forum is back!
» Tron Back To The Grid - Intellivision homebrew
» Ultimate PC Interface for Intellivision back in stock
» 1982 Concept Car with an Intellivision Integrated in the Back Seat